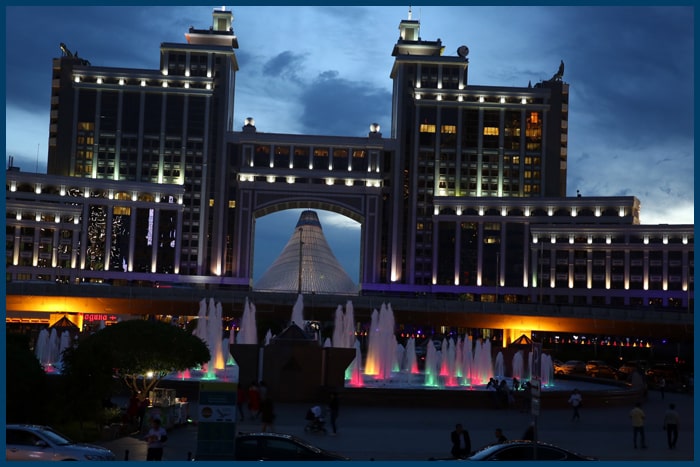 Length of the tour: 6 days

Day 1: Almaty
Upon arrival you we will transfer to the southern capital of Kazakhstan, Almaty. Here you will have a highlight tour and explore the most prominent sites. The first destination of the tour will be Almaty Museum, and you will also visit one of the oldest of Almaty parks - Park of 28 Panfilov Guardsmen. Walking here you will have a chance to explore one of the most enchanting landmarks wooden building in the world - Zenkov Cathedral. Then you will direct to the Green Bazaar where you will have a chance to explore amazing rows, buy interesting souvenirs and take colorful photos. After that you will continue tour with visiting the fascinating Medeo Gorge that is located at the altitude of 1690 meters. Here the tourists will have a chance to explore the fascinating the highest mountain skating rink in the world and the dam. You will explore the fabulous territory, take photos and breathe fresh air in Shymbulak ski resort. Afterwards you will direct to the top of Kok Tobe hill. It is important to note that here is situated the tallest TV tower in the world. Don’t miss a chance to wander here along the fabulous path, marvel at the panorama views and discover the fascinating scenery.  Enjoy the end of the tour with a short ride from the top of the hill by cableway. The night will be in the train Almaty – Taraz. Train #379T 20:16 – 08:11(This is subject to change.)

Day 2: Almaty – Taraz – Sairam – Shymkent
You will be net by our representatives at the railway station after arrival in Taraz from Almaty. Today you will have a chance to explore the fascinating places as History Museum, Karakhan and Dautbek Mausoleum, Tekturmas Historical Complex, Akyrtas antient palace complex. Taraz is one of the oldest cities in Kazakhstan, it is often called the cradle of Islamic culture in this state. Serving as one of the central links of the Great Silk Road, the city became famous during the early Middle Ages as one of the most important centers of international trade, crafts, science and culture.  After that you will travel to Sairam, and you will know that it is the region of Shymkent. During the tour you will explore Ibrahim-Ata Mausoleum, Karashash-Ana Mausoleum, and medieval minaret. The village of Sairam is one of the oldest settlements on the territory of Southern Kazakhstan. It is located on the Sairam-Su River, 15 kilometers east of the city of Shymkent. In the early Middle Ages (IX-XII centuries), the city of Ispijab was located on the site of Sairam.  Here was also born the great enlightener of XII century - Khoja Ahmed Yasawi. Here are also located mausoleums of his father and mother, Ibrahim-Ata and Karashash-Ana. You will continue the tour with transferring to Symkent. You will rest the night in the hotel in Shymkent.

Day 3: Shymkent – Otrar Settlement – Turkestan – Shymkent
After breakfast you will travel to Otrar Settlement that is far about 220 km. Today you are going to explore the great the cities of the Great Silk Road – Turkestan and Otrar. There are located the Mausoleum of Khoja Ahmed Yasawi, and also the small Mausoleum of Rabiga Sultan Begim Mausoleum Arystan Bab. Here you will also see ancient baths and other structures. Turkestan is one of the historical cities of Kazakhstan, the archaeological excavations of which date back to the 4th century. It became a commercial center after the final decline of Otrar, a medieval city whose ruins lie near the Syr Darya in the southeast. The city of Otrar is one of the oldest cities in Central Asia. The city was first mentioned in the 9th century as the birthplace of Al-Farabi — a great Arab philosopher and mathematician whose works influenced the philosophy of the Middle East and Europe. The city was located on one of the main branches of the Silk Road and had a garrison of many thousands, today in tours you will be able to learn its history. Accommodation is in Shymkent.

Day 4: Shymkent – Aksu-Zhabagly Reserve – Shymkent
After the breakfast you will transfer to the fascinating Aksu-Zhabagly Reserve. The Aksu-Zhabagly Reserve is an incredibly picturesque place that attracts tourists from all over the world. Here you can see all the splendor of the "Heavenly Mountains": snow-capped peaks and majestic cliffs, narrow river valleys with stormy mountain streams, breathtaking waterfalls and deep gorges with their wild inhabitants. The reserve is not only home to many species of rare plants and animals, but also preserves the heritage of past eras — fossils of Jurassic flora and fauna, as well as ancient rock carvings — petroglyphs.The flora of Aksu-Jabagly is very rich. There are about 60-70 species of mosses, lichens and algae, more than 1300 species of higher plants, as well as more than 250 species of fungi. You can also find out that there are a lot of birds here. It is home to many bird species out of 267, and 11 species are listed in the Red Book. A rare species of lizard-a grass lizard from 11 species of reptiles living on the territory of the reserve, is listed in the Red Book. After that you will transfer to Shymkent. Night will be in the hotel.

Day 5: Shymkent
This day is the last day of the tour. Along the tour you will explore the most remarkable sites and discover the best objects.  This one is the regional center of the South Kazakh region, as well as the third largest and most important city in Kazakhstan. the largest city in Kazakhstan by population and the first by area, one of its largest industrial, commercial and cultural centers.Shymkent is one of the oldest cities in Kazakhstan, the age of which dates back to about the 2nd century BC. The city was formed at the intersection of the caravan roads of the Great Silk Road. In the written sources that have come down to our time, the Persian historian Sharaf addin Ali (1425) first mentioned Shymkent. In course of the tour you will have a chance to disocver the fascinating landmarks as park named after Sh. Kaldayakov, Monument "Jer Ana", Ordabasy Square, Park “20th Anniversary of Independence of the Republic of Kazakhstan”, Obelisk of Glory, Eternal Fire to the Fallen in WWII, Dendropark – optionally, the regional historical – museum, the ruins of the citadel of ancient Shymkent, pedestrian street "Arbat".  The night will be in the hotel.

Day 6: Chernyaevka
There will be a breakfast at the hotel. Then transportation from Shymkent to Zhibek Zholy, Chernyaevka border.

Train Almaty – Taraz (4 berths per compartment) – from 40 $ per person