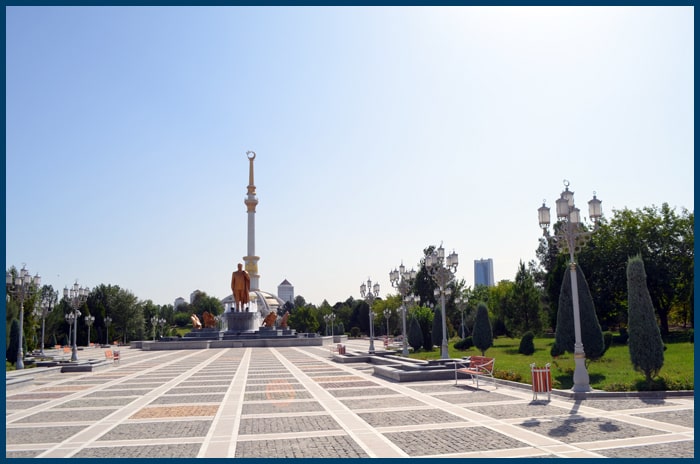 Name of the tour: Father of Caves tour

Day 1: Ashgabat
Today you will be met by the local guide at the airport. After that you will transfer to Gokdepe village. Here you will have a chance to admire the significant site in Turkmenistan -Mosque Turkmenbashy Ruhy. You will observe the largest Mosque in Central Asia. You will be able to explore that about 10,000 people can pray in this mosque at once. The mosque itself was opened in 2004, and was named after Saparmurat Turkmenbashi, the founder and first President of Turkmenistan. Then you will travel to Gokdepe horse farm. There you will observe the fascinating Akhal Teke horse and be impressed by its views. Exploring the place you will have a chance to overlook charming breed of horse that has been around for 5,000 years. After that you will return to capital Ashgabat. During the tour you will explore the amazing sites the Independence Park and the Palace of Happiness. This night you will rest in the hotel.

Day 2: Ashgabat – Nokhur
In the morning you will travel to glorious Nokhur village. Nohur is a beautiful place that is located at an altitude of 1000-1100 meters above sea level in the valley between the mountains of Uchkui and Monoman. In hard-to-reach places on our planet, you can still find villages with ancient and very unusual traditions that have been preserved there for centuries. This includes the village of Nohur in Turkmenistan, which customers can enjoy. In tours of Turkmenistan, tourists explore that the name of the city is associated with the Persian legend of the winged maidens of Peri, since "no" and" hur "are translated as "nine Peri", others - with the name of Noah. This night you will rest in the hotel.

Day 3: Nokhur – Kow Ata – Ashgabat
This day you will transfer to to Kow-Ata underground lake. You will be able to explore the underground lake, which attracts the attention of tourists with its views, because it contains 38 healing elements, and attracts the attention of tourists. During the tours, you will be able to find out that the temperature of the lake keeps from 33 to 38 degrees all year round. The lake translates as "the father of caves". The second part of the tour is devoted to exploring the memorial complex. Here you will have a chance to observe three constructions devoted those who victims who died in 1948, soldiers who gave their lives for the honor of the Motherland in World War II. Moreover in the the tour you will visit the Russian Market. You will be able to explore that the Russian Bazaar is the state shopping center "Gulistan". And it is the main city bazaar of Ashgabat, it is the most popular point of the city. Here the locals will be able to buy a lot of food and here are many public catering establishments. This day you will also discover Ertugrul Gazi mosque. During the tour, you will be able to explore that the Azadi Mosque is one of the most beautiful mosques in the capital Ashgabat, and is also built in the Turkish style. The capacity of the mosque is 5000 people. The mosque was built after independence. You will have free time in the city in the evening. During the tour you will have a chance to explore the amazing sites, new parks and amazing sites. The overnight is in the hotel.

Day 4: Flight
In the morning is transfer to airport.