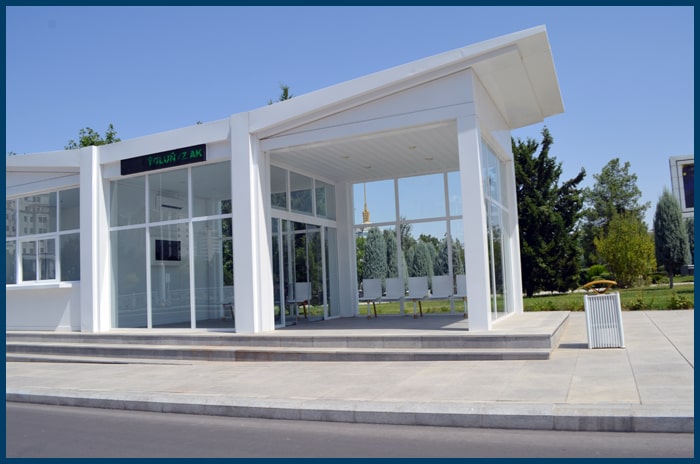 Name of the tour: Diverse Turkmenistan

Length of the tour: 7 days

Day 1: Ashgabat
After the arrival you will meet with the guide at the international airport. After that you will transfer to the capital of Turkmenistan Ashgabat. Ashgabat is the capital of Turkmenistan. The picturesque capital is located in the foothills of Kopetdag, 25 km north of the border with Iran. You will observe today the popular attractions of the city and discover the best sites. After that you will drive to the hotel and check in. In course of the tour you will discover the best objects of Ashgabat and explore the history. Night will be in the hotel.

Day 2: Ashgabat – Mary/Merv
This day you will transfer to Mary province where you will have a chance to explore the ancient Merv. You will know during the tour that the site is the part of UNESCO World Heritage Site. You can learn that this place is one of the main archaeological sites of Central Asia. During the tours you will be able to explore that this city was significant and especially important during the Great Silk Road, for 2000 years. Today you will also explore the fabulous Mausoleums of the Sultan Sanjar and Muhammad Ibn Zayd of XII century, and be amazed at the beauty of Seljuk brickwork and architectural decoration. This day you will enjoy National History and Ethnology Museum in the second part of the tour.

Day 3: Mary – Ashgabat
In the morning you will travel to wonderful Ashgabat city. En route you will stop at ancient Nedir Kala. In the 18th century, he ordered the construction of the fortress of Nadir Shah. The second part of the tour is devoted to amazing attraction “Old Nisa”. In 2007, Nisa was included in the UNESCO World Heritage List.It was an ancient Parthian settlement located near the Bagyr microdistrict of Ashgabat, Turkmenistan, 18 km southwest of the city center. Nisa is described by some as the first site of the Arsacid Empire. You will continue the tour with amazing Ertugrul Mosque. In the tour you will be able to explore that this beautiful mosque is the incredible Muslim mosque of Turkmenistan. You will be amazed by the beauty of the mosque, and you will be able to enjoy its decoration, see the unsurpassed style and rich decoration. The mosque is considered one of the most beautiful and its splendor will surprise you. It is the largest in the world and was built in the Turkish style. You will be able to explore that the mosque has 4 minarets and seats about 5,000 people. You can also explore that the mosque itself was named after Ozujan Ertogrul-Osman I, the father of the first ruler of the Ottoman Empire.

Day 4: Ashgabat – Kow Ata – Nokhur village – Ashgabat
This day you will explore the fascinating Gokdepe. During the tour you will have a chance to overlook the real brilliant of Turkmen people and admire Akhal Teke horses. This day you will have a chance to see the charm of amazing Akhal Teke horses. You will also observe the ride and race on Akhal Teke horse and try your skills ride it. After that you will proceed the tour with fabulous Kow-Ata. Significant mineralization and constant high temperature-33-37 degrees Celsius, indicate that the waters of the Baharden underground lake rise from a great depth, from about 600-650 meters. The age of the cave is several thousands of years.Kov-Ata is the largest underground lake. With a width of up to 23 meters, up to 75 meters in length, it goes between the high stone walls somewhere in the semi-darkness. The average depth of the reservoir is about 10 meters, the maximum is up to 15. The area of the water mirror is very impressive — about a thousand square meters. You will have a chance to observe see Khur Khuri waterfall.

Day 5: Ashgabat – Darwaza
Today you will discover the interesting carpet museum. Here you will have a chance to discover the charm of more than 2000 ancient carpets, including an outstanding wine-colored carpet. The tour you will continue with exploring one of the most facinating sites of Turkmenistan– Gas Crater “Darwaza”. The Gate to Hell is located in the heart of the Karakum Desert, 260 kilometers north of Ashgabat. Especially the crater of Darvaza resembles the underworld in summer. After all, the air temperature in the Karakum desert in the midday heat often rises to 50 degrees Celsius. In the tours you can explore that for decades this crater has attracted the attention of tourists and has a depth of about 20 meters. In 1971, a hole was dug by mistake, and for many years tourists have been attracted to this hole. Tourists come here every year and enjoy the attractive views of the crater, enjoy the charming starry sky.

Day 6: Darwaza – Ashgabat
After breakfast you will drive back to the capital Ashgabat. In the second part of the day you will arrive to the capital. You will have a chance to have free time, shower and take a rest. After that you will head to the memorial complex. During the tour of Turkmenistan, you will be able to explore that it was opened in 2014. It is important to note that this complex was built to commemorate the historical events that occurred in Turkmenistan during the earthquake in 1948. And also to the Second World War and other battles. In tours of Turkmenistan, you will be able to explore that this is one of the most important sights of the city. She was able to leave a huge mark on the history of Tashkent events of the 20th century, which depict a bull and a child. After that you will have free time.

Day 7: Flight
In the morning is transfer to the airport.