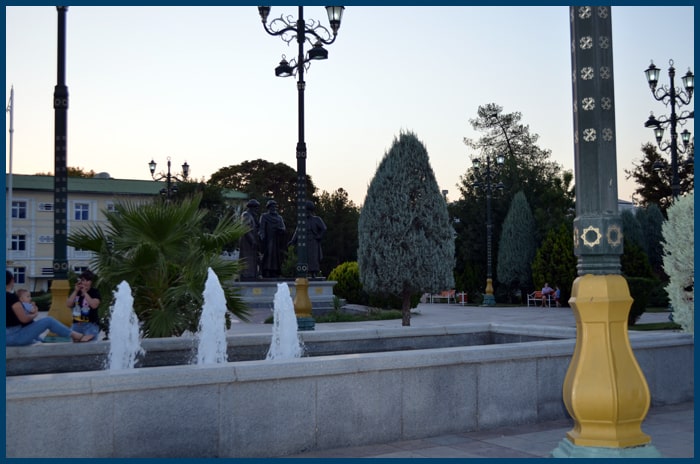 Name of the tour: Gems of Turkmenistan

Length of the tour: 10 days

Day 1: Ashgabat
Today you will meet the local guide at the airport, and after you will transfer to Ashgabat. This day you are going to have a city tour in the capital of Turkmenistan. The first destination that you will explore will be ancient Nisa fortress- Since 2007, the ruins of Nisa have been included in the UNESCO World Heritage List. The remains of the capital of the once powerful Parthian kingdom, built around the second century BC. The city was built at the behest of King Mithridates. After that you will discover great Mosque in Central Asia Ruhy Mosque or Gypjak. It considers the largest mosque in the Central Asia, Mausoleum of the first President of Turkmenistan.  After that you will continue the tour with an interesting gem of Turkmen people - Akhal-Teke horses. You will see that it is the real brilliant of Turkmenistan and they are really proud of it. The farm you will find in Gokdepe region. Here you will also have a chance to observe the ride and races of the horse. You will complete the tour with transfer to Ashgabat. The overnight is in the hotel.

Day 2: Ashgabat – Kow-Ata – Nokhur – Balkanabat
After the breakfast you will travel to amazing Kow-Ata underground lake. Kov-Ata is a unique creation of nature, which can rightly be called a miracle. It is located in the cave of Mount Kou, 100 km from Ashgabat, in the Baharli district. Its name translates as "Father of the cave".Cave lake, measuring approximately 75 by 23 meters. The water temperature is very comfortable-about 37 degrees Celsius. Information about the grotto appeared at the end of the XVIII century, but the message in the local press appeared only in 1896. In the lake itself there are about 38 elements that contribute to the fact that the lake is very healing. You will continue the tour with driving to Nokhur. Nohur is a small village located in the beautiful mountains of Turkmenistan, at an altitude of 1000 meters above sea level. You can go to the "paradise" to find out that the path is long and difficult – ascents, descents, mountain serpentine. But all the hardships of the road are forgotten at the sight of this rare beauty of the place, closed on four sides by high mountains.  After that you will travel to Balkanabat. This night you will rest the night in the hotel.

Day 3: Balkanabat – Yangykala – Gozli Ata – Turkmenbashi – Avaza
After the breakfast you will transfer to Yangikala canyons. Angiola translated from Turkmen - fire of the fortress. These are picturesque canyons 30 km away. east of the gulf of Karabogazgol. This name is given to the canyons because of the predominant red color of the rocks that make up the mountain ranges and cliffs.  You will have a chance to overlook the fabulous vies of canyons are surrounded by sheer walls of purple-red, ochre, yellow, white and fiery red colors. Along the way you will visit the picturesque Kemal Ata canyon. You will observe a spring, to which sheep and camel herds are driven to drink. Gozli Ata Mausoleum is the most remote place of pilgrimage in Turkmenistan. The mausoleum is located in a picturesque place, surrounded by pink, greenish, reddish mountains of amazing shape and beauty.  After that you will direct to Awaza. You will spend the night in the hotel.

Day 4: Awaza – Ashgabat – Mary/Merv
In the morning you will transfer to airport and the fly to Ashgabat. After arrival you will have a chance to visit Abiverd. It is one of the eight historical reserves of Turkmenistan, along with Nisa, Merv, and Serhs.The ruins of the medieval settlement of Abiverd are located in the middle of the road between Ashgabat and Mary. It is one of the significant cities of North Khorasan. In his geographical works, Hafiz-i-Abru, a writer of the XV century, recalls that the settlement of Abiverd consisted of several dozen villages, villages and a number of cities.  Then you will have a chance to transfer to Merv. This is the enlightened city of the middle ages and thousands of years of antiquity. The origin of Merv is shrouded in mystery, one thing is certain - the first written mention of it appears in the Avestan chronicles around the VIII-VI centuries BC. In course of the tour you will have a chance to discover fascinating sites as Gyz Gala, Erk Gala, Soltan Gala, Soltan Sanjar Mausoleum, Ibn Zeid Mausoleum. After that you will travel to Mary city. This night you will spend the night in the hotel.

Day 5: Mary – Margush – Ashgabat
You will star the tour with exploring the Oasis of Merv - the 5th center of civilization. In the tours you will be able to explore that this is the capital of the ancient Margush, called Margiana in the Greek and Roman chronicles – - not just the largest settlement in Central Asia of the Bronze Age (late III-mid II millennium BC). It is also a vivid symbol of the deepest roots of the Turkmen people, whose distant ancestors created such a high culture that scientists around the world agreed: The country of Margush, the center of which was Gonur-depe, along with Ancient Egypt, India, and China. Margush was a thriving ancient kingdom in the Mara region. Using the material of the latest archaeological excavations, we can confirm with confidence that this kingdom existed 5 thousand years ago.  After that you will transfer to Ashgabat city. This night you will spend in the hotel.

Day 6: Ashgabat
In the morning you will have a fascinating city tour in Ashgabat. In course of the tour you will have a chance to enjoy the amazing attractions such as: Revival Park, Russian Market, Lenin’s square, Ertogrulgazy mosque, Park of Independence, Arch of Neutrality. After that you will explore Museum of Ethnography and Museum of Fine Arts. You will spend the night in the hotel.

Day 7: Ashgabat – Damla
Today you will transfer to Damla village. You will explore this village in the center of Karakum desert in Turkmenistan.  Today you are going to discover the fascinating traditional Turkmen life. You will be able to explore that there are about 60 dwellings that are located in the bubbling sands, and the locals enjoy their normal life. Here you will have a chance to overlook ancient village and discover the lifestyle. You will have a chance to observe that it is place more fascinating. In this place you may take photos and get the positive emotions. This night you will spend in the tents.

Day 8: Damla – Darwaza
This day you will travel Darvaza gas crater that usually people call as “The Gates to the Hell”. Before you will observe 2 craters. The Darvaza gas crater is a sinkhole in the territory of a massive natural gas field in the Zaunguz Karakum desert, in Turkmenistan. The word "Darvaza "means"gate" in Turkmen. It is a gas crater located in Turkmenistan. Among the people, Darvaza was called "The Gate of Hell" and "The Door to the Underworld". In 1971, Soviet geologists discovered an accumulation of underground gas near the village of Darvaza. After some excavations, geologists discovered a void-an underground cavern. This tour you will have a chance to overlook this wonderful gas crater and watch the flames. You will see an incredible picture that takes your breath away. Night you will rest in the camp.